Should be subtitled: Detecting Trolls Before They Get Banned.

Jure Leskovec & company look into several online communities to find features that contribute to positive and negative engagement within comments. The authors performed a user study that indicated that users care less about total upvote magnitude, but rather the proportion of positive and negative upvotes. 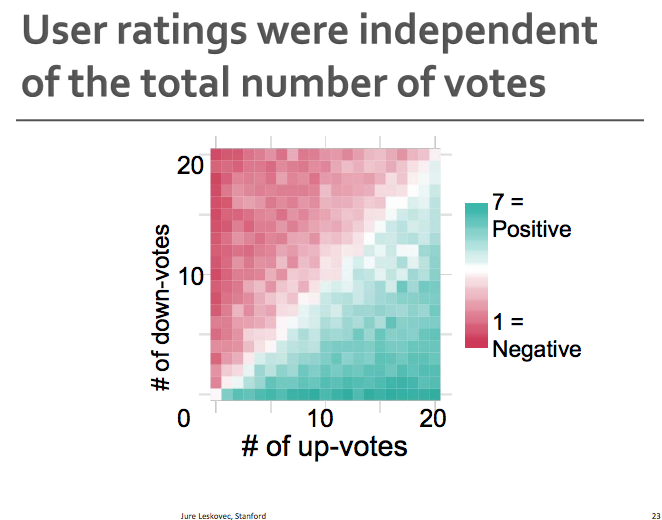 This led to further research in differences between downvoting behavior for negative content and personal reasons, and found that the proportion of downvoting is increasing over time - perhaps indicating increasingly unhealthy communities.

A predictive model for trolls was created using bag of words (text quality), post deletion rate, the number of words in post, post frequency (user activity), upvotes (community), and moderator signals that achieved 0.7+ ROC for various sites with a general model, and closer to 0.8 ROC when trained on each site.

Why Live Interviews are a Particular Challenge for Statisticians

If getting asked by your friends and family what you do for work is hard to answer, imagine doing it interviewed by the press on live performances. Before you live the horror yourself, it’s good to understand what the interviewer is interested in, connecting your numbers or algorithms to people; what effect do you have on people and why people affect your work.

Silicon Chips That See Are Going to Make Your Smartphone Brilliant

Mobile advances in computing, perhaps in the form of custom machine learning or neuromorphic chips, will bring algorithms usually run on some server “in the cloud” closer to the sensors. It’s hard to predict or understand if there are killer use cases for training on the sensor, but this space is getting exciting with industry teams from IBM, Qualcomm, Intel, and now Synopsys (who has its roots in neuromorphic computing surprisingly).

I’ve only semi-recently found out that null hypothesis significance testing is no longer cool. Good riddance! I think most people were forced into the religion in high school science classes. No result was significant without p-values, and with a high p-value then correlation implies causation. Wikipedia has a great summary of p-value critiques, and the alternative section is also telling - there is no free lunch when trying to scientifically demonstrate causal behavior. You simply need more than just a p-value.